Cooperation between Ukraine and the European Union in the Security Sector. Public Monitoring Report 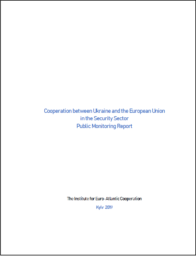 Over the past few years, Ukraine has faced existential security challenges posed by the armed aggression of the Russian Federation. The Russian threat was embodied in temporary occupation of the Autonomous Republic of Crimea in 2014, supplies of weapons and equipment to the unrecognized “people’s republics”, overt intervention by the Russian Federation’s military personnel in the hostilities near the city of Ilovaisk1 in the same year, and regular pressure created by the buildup of the Russian troops on the Ukrainian border. In view of the difference between the military capabilities of Ukraine and Russia, the need for active international cooperation between Ukraine and friendly states in the security sector is obvious. At the same time, given the geographical proximity of Ukraine and the risks associated with Russia’s threats, the European Union countries should also be interested in a partnership with Kyiv. After all, such cooperation supports the European civilizational choice of Ukraine.

The Ukrainian information space lacks information about security cooperation between Ukraine and the European Union, as well as between Ukraine and individual EU member states. This report has been compiled with the use of open data and the information received from the Ukrainian government agencies, and it aims to fill the above gaps. Its purpose is to analyze Ukraine’s actions in the framework of cooperation with the European partners and the approaches allowing the country to respond to its key security challenges. Such analysis seems necessary for a comprehensive assessment of Ukraine’s security policy and further development of an adequate security policy. Finally, we discuss dissemination of information about Ukraine’s current security policy and the indirect effect on the Ukrainian public officials’ decision-making for an effective reform of security policies in the areas where Ukraine’s actions are not in compliance with its obligations under the Ukraine-EU Association Agreement and Eastern Partnership objectives.