Implementation of Association Agreements in Georgia, Moldova and Ukraine: a Comparative Overview 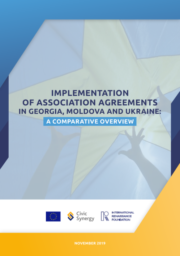 This comparative overview of Association Agreements implementation in Georgia, Moldova and Ukraine was prepared in order to facilitate search for common interests of the three countries in cooperation and peer-to-peer learning. It presents the key information to apprehend and compare the content of the three Associated Agreements (AAs); domestic political contexts, governmental and parliamentary mechanisms of their implementation, and the institutions for civil society participation; as well as the key data on relationship between the EU and the three countries in security and in trade.

This comparative analysis shows important nuances. In general, AA with Ukraine provides for deeper integration, including by offering the perspective of internal market treatment in a number of sectors. Only in Ukrainian government EU issues are coordinated by a dedicated Vice-Prime-Minister and not by Ministry of Foreign Affairs. Georgian and Ukrainian parliaments have separate committees on European integration while in Moldovan parliament a single committee covers both EU and foreign policy issues. The role of respective parliamentary committees in law making varies substantially, but in all three cases, their opinions on legal drafts are not binding. Compliance check tables are required for legal drafts submission by MPs in Georgia and Moldova, but not in Ukraine (though majority of draft laws in Ukrainian parliament are submitted by MPs). There are also important nuances in the composition of the bilateral civil society platforms established under the AAs, both from the countries’ and from the EU side. All three countries are working with the EU on updating the Annexes to AAs, with Ukraine being most active.