The Aviation Vector of the Eastern Partnership: Assessment of Progress of Ukraine, Moldova and Georgia in Approximation to EU Aviation Law 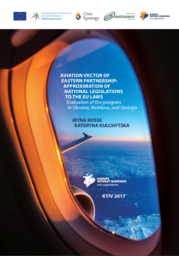 Since 2007, Kyiv and Brussels have been negotiating Ukraine’s accession to the European Common Aviation Area. No agreement with Ukraine has been signed so far because of the territorial dispute between Spain and the United Kingdom. The paper studies the experience in signing and implementing similar agreements in Moldova and Georgia. A separate part of the study deals with the signing and implementation status of the Common Aviation Area Agreement in Ukraine. The study was intended to evaluate the scale of necessary transformations in Ukrainian legislation as well as likely consequences for Ukraine’s aviation sector.